How The Alcohol Industry Has Pivoted The Customer Experience 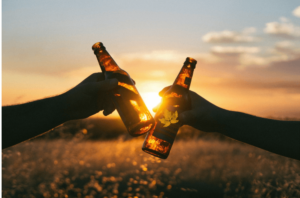 The customer experience of drinking alcohol has changed quite a bit in the last year.

Remember wine and spirit tastings at the grocery store or liquor store? You were handed a tiny plastic cup filled with high-propane liquid and suddenly it was like college all over again.

Except that’s not how (most) adults drink, so it’s not a particularly effective trial mechanism.

I’ve written previously about Sipsmith Gin, which created a personalized and immersive experience for consumers to taste its product in pre-pandemic times. (The case study will also appear in my new book, which releases September 14th.)

Today, live tastings aren’t exactly popular, so alcohol companies have had to adapt. And one fascinating trend is the return of the 50 milliliter bottle – the ubiquitous “mini bottle” found on airplanes and hotel minibars.

As Scott Harris, co-founder of Catoctin Creek Distilling Company, told Whisky Advocate, “Store tastings have stopped completely nationwide and without tastings, there is no easy way to get customers to try our products before committing to a larger 750 milliliter purchase.”

Not surprisingly, the magazine focused on whiskey examples of the trend, and they range from a $2 Bushmills Red Bush Irish Whiskey to a $20 Johnnie Walker Blue Label. Even coveted single malts have gotten into the game, and one distiller, Compass Box, saw success packaging four different mini bottles into a set – essentially a tasting in a box.

This is a trend that is likely to continue because it gives people the ability to try before they buy at a much lower cost. And importantly, just like Sipsmith, it offers consumers a way to taste a spirit in a more typical environment than a plastic shot glass in the grocery store.

The pandemic’s impact on the alcohol industry hasn’t just been limited to liquor tastings, though. According to NPR, people are drinking more at home, thanks in part due to the newfound ability to order drinks to go from restaurants. And as a result, there is exploding demand for… nonalcoholic beer.

Today’s NA beer, says the Chicago Tribune, is not your father’s O’Doul’s. It’s the craft breweries that are now getting into the game, creating brown ales, wheat beers, IPAs, coffee stouts and even Oktoberfest varieties, all without alcohol.

This follows the success of Heineken’s Heineken 0.0 product in 2019, which quickly became the number-one selling nonalcoholic beer in the United States, knocking out – you guessed it – O’Doul’s.

The trend found momentum during 2020 because as people started drinking more at home, many also realized that it was time to cut back. Recognizing consumer trends in real-time is a great way to create a highly desirable customer experience.

According to the Tribune, nonalcoholic beer sales were up 38 percent in 2020. And although it still only represents one half of one percent of the entire beer industry, NA’s are sprouting up everywhere, and industry observers think that this trend has legs.

Both of these interesting alcohol industry trends emerged because of the pandemic, and both demonstrate that pandemic-era pivots may just create the next big thing – and even if not, they are probably here to stay. So cheers to product innovation!